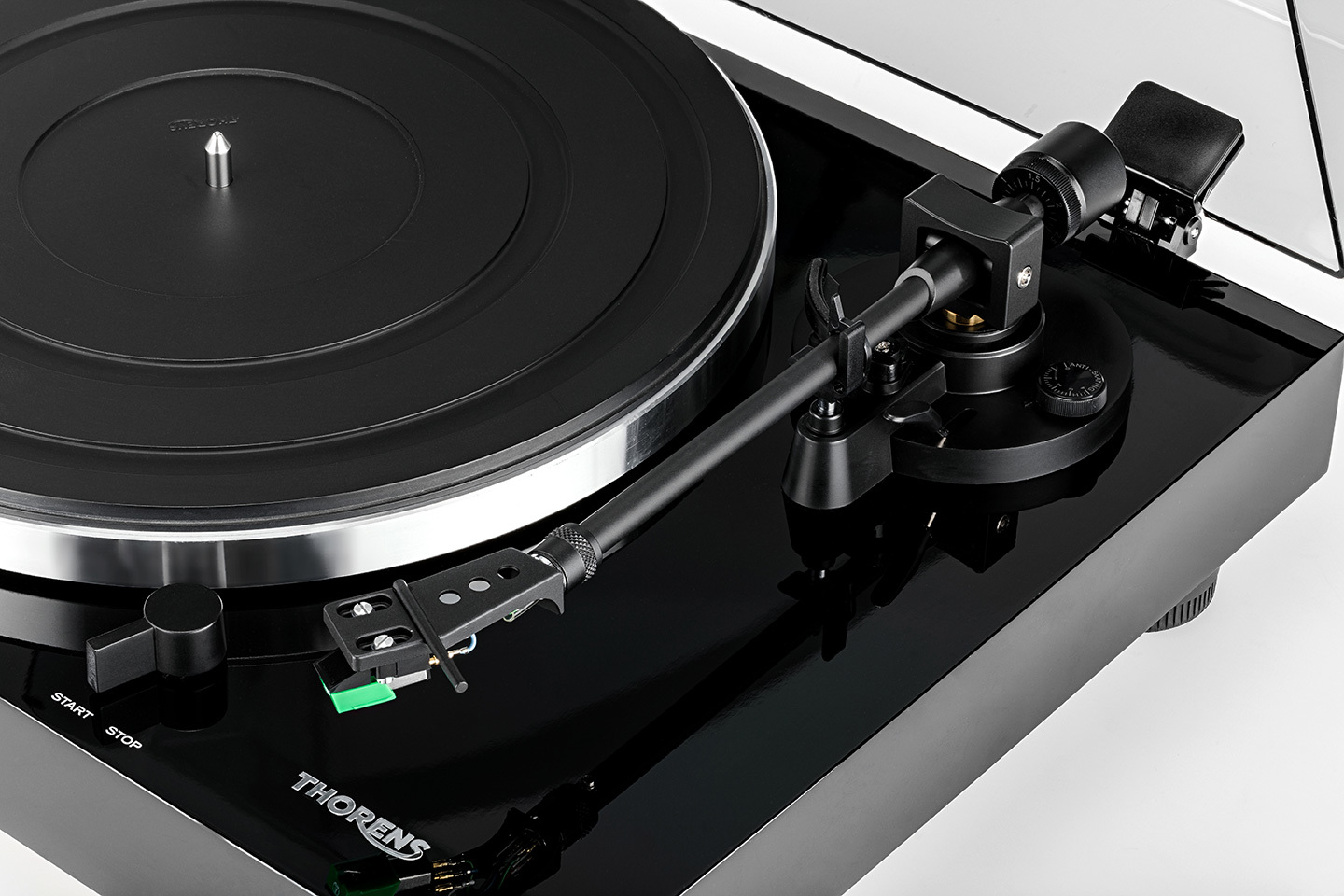 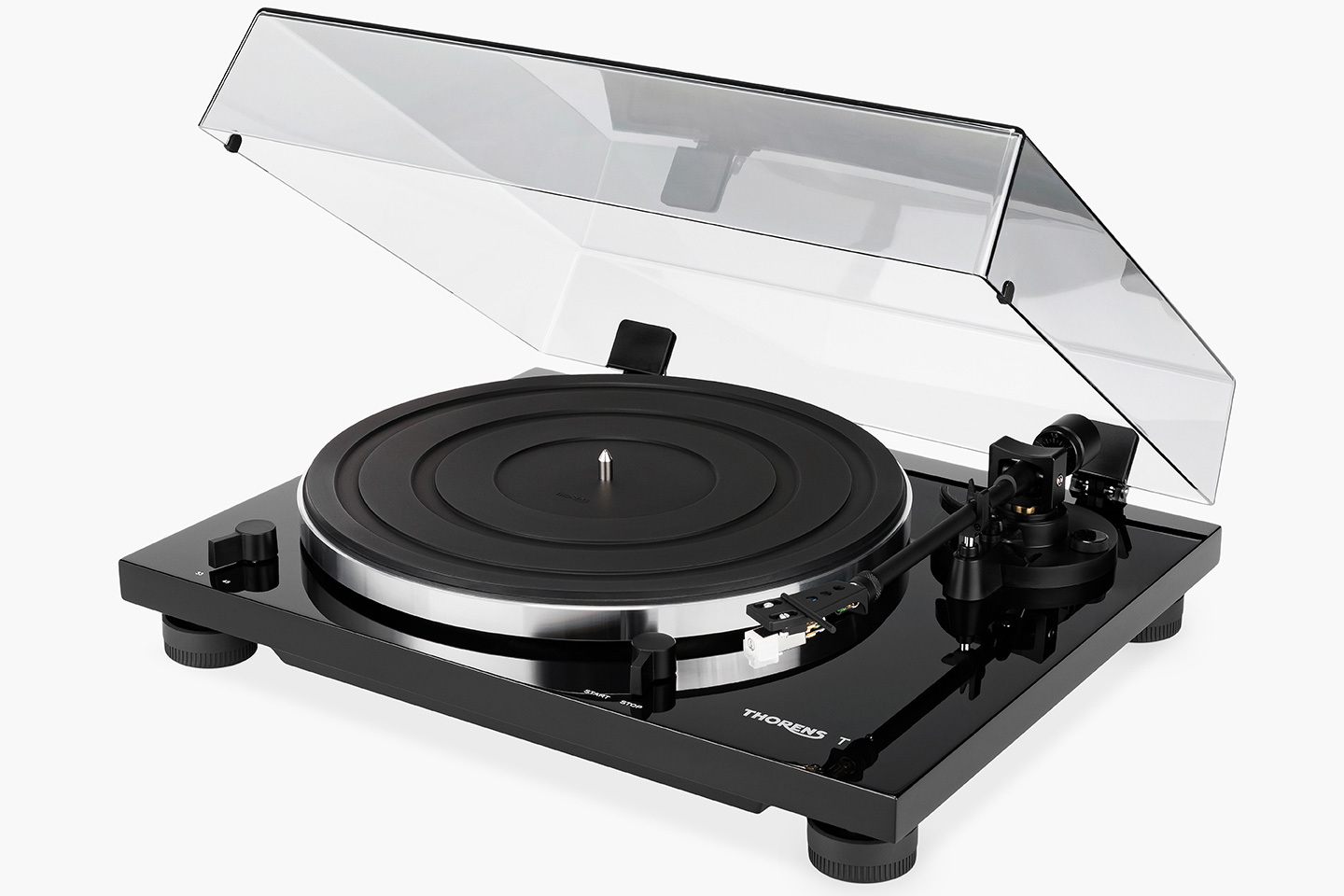 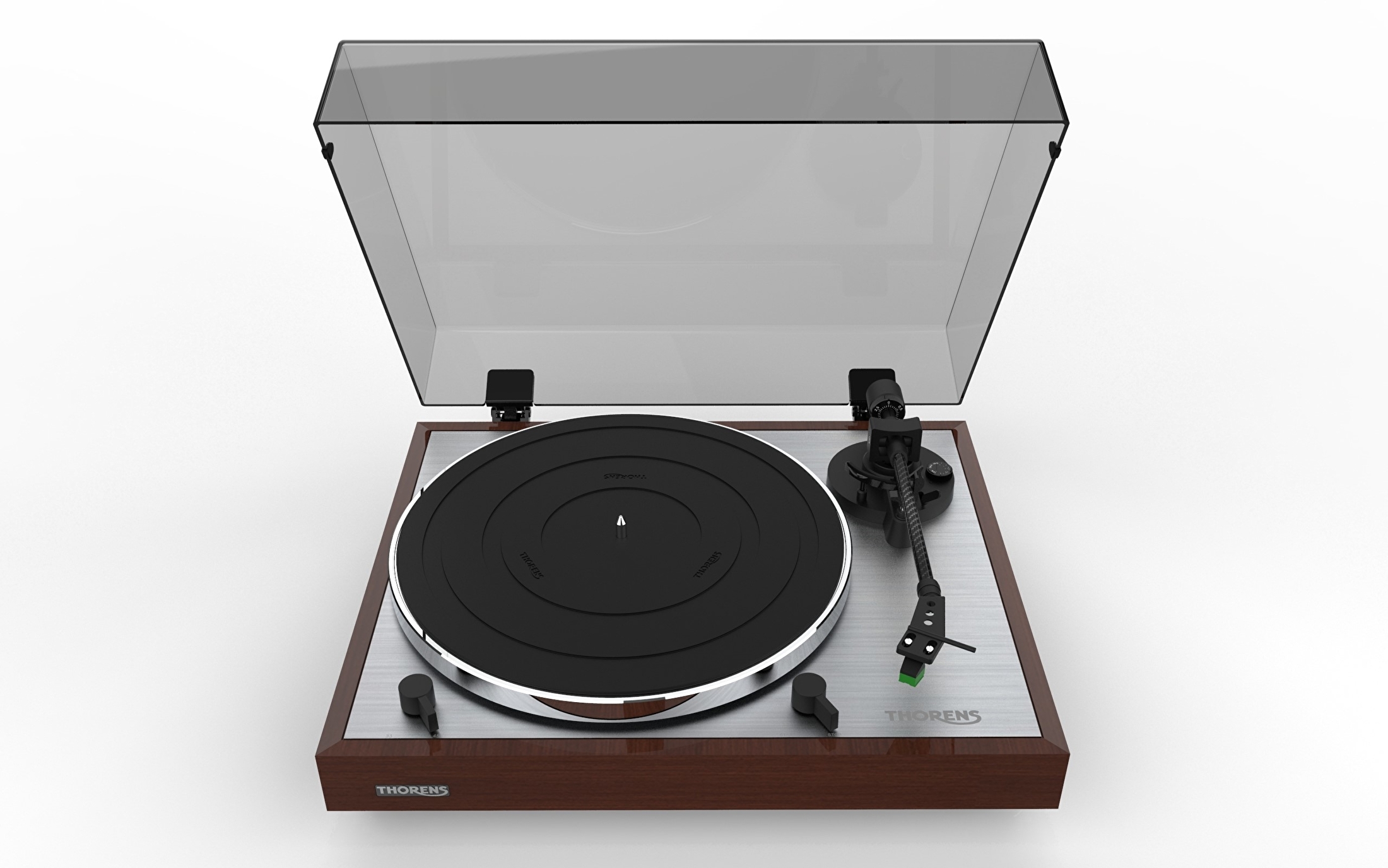 Throughout the company's history, Thorens has developed a number of devices that have become milestones in the history of consumer electronics. The most important are listed in this list. In maintained condition, even the oldest devices on this list still offer high to highest playback quality.

The Thorens TD 124 set standards in quality and reliability in record reproduction when it appeared on the market. Its elaborately designed drive was based on an idler wheel, which was driven to reduce engine influences by a short belt. The two-piece platter was designed so that a record change without stopping the engine was possible. Initially equipped with the tone arm Thorens TP 14, later came versions with different arm bases and matching plinths. Legendary here was the equipment with long SME 3012 arms. According to the time records could be played at all four speeds (16 / 33.3 / 45/78 rpm). Even today, the Thorens TD 124 is in great demand and prices for maintained devices regularly exceed the then new price many times over.

The Thorens TD 150, an inconspicuous small turntable that was manufactured for the first time in Germany and was offered much cheaper than the TD 124, was the origin of a technical revolution in turntable construction. For the first time, a suspended subchassis using cone springs with an inner platter driven by a flat belt was used in a high-volume machine. The principle has proven to be very successful and has found many imitators in the years since. The TD 150 came as standard with the tonearm TP 13, from 1969 the TD 150 Mk II with the TP 13a, also known as "ball arm". Countless variants with other tonearms were added and still exist in large numbers. All subsequent models until the mid-1980s kept the principle of the suspended subchassis with conical springs, which was used here for the first time.

From 1968 Thorens TD 125 followed the TD 124. He took over the principle of the spring subchassis from TD 150, but was designed as a large and heavy drive for a different audience than the smaller one. The TD 125 also used for the first time an electronic control for the 220V synchronous motor, achieving an excellent running smoothness and speed stability. Originally the turntable was equipped with tonearm Thorens TP 25, later as Mk II also with the original TP 16. A variant with larger frame called TD 125 LB allowed the installation of long tonearms up to 16". For professional use, for example. In discos it was possible to replace the conical springs with rubber buffers.

The TD 160 is now considered the classic Thorens subchassis turntable. Introduced in 1972, he replaced the smaller TD 150 and was produced in all versions until the 1990s. Heavier and more stable than its predecessor, the principle of the suspended subchassis has always been preserved.
In addition to the models TD 160 - TD 160 Mk V there were a large number of variants with reinforced chassis (TD 160 super), with auto shut off (series TD 145/146/147), with a lightweight inner platter and small platter bearing (series TD 165/166 ), with different tonearms (TP 11, TP 11 Mk II, TP 16 - TP 16 Mk IV, TP 50, TP 90) and without tonearm for fitting with any arm of choice (TD 160 BC). All these variants used a synchronous motor (initially 220 V mains synchronous, later 16 V low voltage) without electronic control.
The last series, the TD 160 S Mk V had an auto shut off and was equipped with the outstanding tonearm Thorens TP 90. Correctly set, the MK V is still an excellent device that needs no comparison to shy away.

In 1976 TD 126 replaced the TD 125. The new models offered comfort features such as electric lift, auto shut off and in the most successful model, the TD 126 Mk III, for the first time a tacho controlled DC motor to compensate short-term fluctuations in speed, for example, by record brushs.
Instead of the proven Thorens TP 16 Mk III, various third-party arms (SME, Koshin, Dynavector) could be delivered directly from the factory, whereby the automatic functions were most retained.
The Thorens turntables TD 127 and TD 226 were derivatives of the TD 126 for long 12“ tone arms (TD 127) and for mounting two tonearms to the right and left of the turntable platter (TD 226). Both models had a correspondingly enlarged frame and a customized sub-chassis. With the series for the first time a vaccum platter mat was offered for calming uneven records. Today, the models TD 127 and TD 226 are strongly demanded by collectors who will pay much more than the original price for them.

In 1984, Thorens introduced the 300 Series (TD 316/318/320) for the first time with a new variant of the suspended sub-chassis: leaf springs were designed to neutralize any horizontal movements of the subchassis which did appear when using conical springs. The TD 320 first became the top model of this series. Equipped with the proven tonearm TP 16 Mk III, later Mk IV, TD 320 Mk II and Mk III of the TD 320 got the new TP 90 tonearm. Added to this was a motor control with a two-phase generator, which guaranteed excellent wow & flutter values.
TD 321 came without tonearm, TD 320 "Phantasie" had a transparent acrylic chassis, the "Concrete" a concrete base.
Further developments with better damping and modified subchassis were the later models TD 325, TD 2001, TD 3001, as well as the end of the 1980s in a small series with design frame, SME tonearm and elaborate power supply produced Thorens „Ambience".
The models TD 2001 and TD 3001 are considered by many today as the best over all quality of Thorens turntables before year 2000.

In 1980, Thorens decided, regardless of cost, to develop and market an ultimative turntable. The result was called Thorens Reference, weighed 90 kg, was designed for up to three tonearms and had a tunable subchassis! Externally, the Reference looked like any kind of mass drive, in which simply a heavy platter is placed on an even heavier framework and smoothness is generated solely by mass. But the Reference was different, the design was much smarter. Simply, that it had a subchassis and the platter weighed only 6 kg, makes it unique. The model was made on request in an official edition of 100 pieces, customers could choose individual color combinations and order individual tonearms. The price was exorbitantly high at almost 18,000 DM just for the turntable but is now significantly surpassed for used devices.

In 1983, for the 100th anniversary of the company, another large model entered the market: the Thorens Prestige. Qualitatively equivalent to the Reference, with subchassis and electrical lifts for two tonearms. A super drive also by today's standards and unique because of its subchassis.